It’s that time of year again, and I just got lucky. Picking up my tax return I learned that contrary to the serious checks I expected to have to have postmarked today, my payment is less. Much less. Well then. How’s that for a belated Hanukkah gift? At least it’s an event shrouded in a cloud akin to a miracle for me. I love miracles. And my tax guy.

I’m a self diagnosed “tax trauma survivor, ” since my dad was a notorious tax evader. Honestly, he was more of a tax protester, and even did some time in the mountains of Norway for “white collar crime” in a place we came to call his summer camp. He took it in stride as the service at the open-door facility was excellent, his laundry was done and folded, they asked he if wanted fish or pasta for dinner and he was sent home on leave every third weekend with spending money in his pocket. Really.

But my mom didn’t take that brief episode of incarceration with the same lightheartedness. Who can blame her? For her it was the end of the rope of a lifelong accumulation of poor financial decisions on my dad’s part. I actually think he had some kind of traumatic childhood experience that translated into his visceral revulsion of all things “authority,” like the heavily taxing socialist state of post WWII Norway or the uniform clad Norwegian parking guards that take their job a wee bit too seriously issuing tickets when you are parked one meter too close to the corner. His sort of “PTSD,” I believe, may have had its roots in his childhood memory of the Nazis who had occupied Norway. For, when he was a little boy his father was imprisoned by the Germans (or the collaborating Norwegian police) for trafficking documents for the resistance in his taxi. When my dad, a mere 7 year old boy, made the trek with his mom to the prison camp to see him, they were denied entry. I imagine the guard wore a uniform. I imagine he was Norwegian, working for the government. You don’t need to be Freud to connect the dots here.

My father’s childhood trauma and adult behavior subsequently morphed into a sever form of numbers dyslexia in his offspring: me. When I look at numbers, budgets, or bills, things get blurry and I hide the piece of paper in a growing pile on my kitchen counter, thinking my need to attend to it will be go away. The only numbers I seem to be able to deal with only go as high as the overdue fines from the library, and even those I count in Norwegian, like a kid in nursery school counting the ducklings on the cardboard book page. They don’t go much higher than 10. Yes, it’s that serious.

I’m guessing my subconscious reason for having fallen for a man with a compulsive tendency of making sure every dollar and cent were accounted for is obvious by now.

My own little family her in the USA dubbed April 15th the beginning of Fun Season, because my ex-husband is an accountant and the arrival of this much anticipated date meant a new kind of life for us. The kids and I would hang a huge home made sign on our fence announcing “Happy Fun Season, Pappa!” as he would roll in at half mast after the post office had closed, the balloons tied to the fence at the beginning of our driveway bouncing, like the children, with anticipation in the promising April air.

Like my dad, when I fall into some extra cash I immediately find fun ways to spend it. Why add them to the retirement fund when life is happening here and now, he would have said. So after I dutifully cut my modest tax payment checks to the IRS and wondered if I should hug my tax guy, but seeing as he was unavailable for tactile customer appreciation, I instead treated myself to some sushi and a cold beer, made a small donation to this creative and brave handicapped kid raising money on GoFundMe, and then treated my middle son to a day in Boston with his buddies. 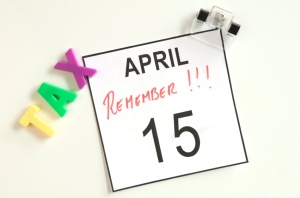