Reading the “About Me” part of my blog, my youngest son asked, “Aren’t you going to give them your name?” He has a point. 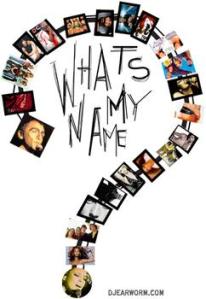 I know that I like to know the name of people I engage with, especially because even if I don’t know them personally I like to envision them, and for some reason, when I know their name, it helps me somehow have an idea about them, at least in my imagination. Which is of course kind of absurd, since Bubba does not have to be a big, jolly fella, nor Hildegard necessarily a rosy cheeked blond farm frau from Germany. But let’s be real, a name helps create a connection of sorts.

The story of how we get our names, or how we choose or change them, should we so be inclined, or lucky, or both, can add a layer to the complexity (read: interesting narrative) of who we are, and allow us to imagine or understand others in a more “contextual” way. For everyone has many layers of (con)texts embedded in their identity; a multitude of fibers, threads and colors contributing to the unique fabric of their being. In the end, a name tells a story of its own. When I have a new group of students, I usually give them an assignment the first day of class to post a short paragraph about their first name on our course blog. This is actually just a trick to help me remember 38 new names and faces with greater ease, since I tend to build stories around most things and humans I encounter. And if the student doesn’t know about how or why they were given their unique name (most are bearers of fascinating small tales about how names are bestowed in their families, and happy for the opportunity to share this piece of family tidbit with their new peers), I invite them to share anything they may have on their mind, about their name. This too, can be quite telling and entertaining, and it creates a connection.

So my name is Nina Boug Lichtenstein, née Boug Kristiansen.

When I grew up I used to dislike my common first name, and fantasized about a more exotic name like Anastasia or Isabelle. There were four Ninas in my school alone and it was definitely a popular name in the 1960s Oslo. Had I known then what I know now about my first name, I might have felt differently. Some of the meanings for Nina in various cultures are: “God was gracious or God has shown favor”(Hebrew), “nice” (Persian), “beautiful eyes”(Hindi), “mother” (Swahili), “strong or mighty”(Native American), “friend” (Arabic), “flower” (Old Greek) and “fire” (Quechua – the people and culture of the Central Andes in South America). Wow. I never knew that until recently.

And I feel better already. Talk about a name with good vibes! I wonder if my parents knew these meanings for my name when they chose it for me. Had they intended these strong attributes for me, as they gave me that first “selective” piece of personal identity? I really do believe in the power of intentions…

In the middle of my identity nomenclature there is Boug (my mother’s maiden name) which I decided to keep when I got married. Boug apparently is a derivative of the French bourg meaning “town” – you may recognize a term such as “bourgmeister” which is German for the mayor of the town. If my parentage hailed from a venerable mayoral family or were just simply “townsfolk” vs. farmers I have yet to find out, but what is clear here, is that the pure blood viking-idea is not in my gene pool (not that there ever was one, or that it was important). Explorers! Travelers and boarder crossers going way back and in all ways. Yup; that’s the genetics I’m carrying. That sounds more like it.

Then there is my maiden name Kristiansen, which I have thought about taking back now that I am divorced, to honor my father who recently died. Kristiansen. I’m The Viking Jewess. I hope you see the irony here. That is Kristiansen as in “son of Kristian” or rather, “of the Christian” (as opposed to “the heathen,” I suppose) according to the Scandinavian tradition of naming. While I did not undergo gender-reassignment surgery (as it is now called) and was never anybody’s son, I did shed my initially State imposed Christian religious belonging. My father, a self-proclaimed agnostic who had withdrawn his membership from the Norwegian State Church (and who took care of the paperwork for me when I decided to do the same) was born into this very common last name, and my grandmother once told me she had wanted to change it, but found the bureaucratic paper-mill overwhelming and so resigned her dreams of a more distinctive last name.

I have now carried the last name Lichtenstein for over 25 years, and I must say it has until recently been a pleasure. I did not mind changing my last name when I married at 23, since just before exchanging vows I had made another significant commitment: to be a Jew and live a life according to Jewish traditions. Somehow, that didn’t seem to fit so well with the last name I imported from Norway. This was engraved in my experience every time I met a new Jewish person and introduced myself – hyper-sensitive as I was about my difference –  culminating on the very day of my conversion, when three stern faced orthodox rabbis sat facing me and my Christian name came up, again and again, like lashes in an inquisition. Morbid exaggeration and reversed imagery aside, it just felt so humiliating, and I somehow imagine it would have been different if my maiden name had been Hansen or Arnesen.

I came to know and love the long-winded Lichtenstein name along with my ever evolving new identity. Spelling it out in almost a melodic manner for every clerk, salesperson or professor who looked like a question mark when I said my name, I adapted quickly. And how many times have perfect strangers not loudly associated my married last name with an entire country, or tiny principality if they are savvy enough to know the difference, and how many times have I answered “No, not quite like the country” or “Yes, like the country” depending on my mood and energy. At times it felt regal, especially in Norway, where it’s pronounced in a way that on a good day can give it an aura of lost grandeur and princely mystique. Not to mention the occasional association with the artist Roy Lichtenstein here in the States. People actually would ask me if we were related. I wish.

About 20 years into my marriage, the Mr. and Mrs. Lichtenstein that we were became Mr. and Dr. Lichtenstein. Joining the two other doctors in the family, my father in law, a DDS specializing in oral surgery, and a sister in law with a PH.D in anthropology, this new, tiny, appendage to my name was hard earned. Eventually came my divorce, and swiftly enter from stage left a new Mrs. Lichtenstein, and here we are.

While enjoying a hike in the woods of Norway with my three sons last summer, I again brought up the topic of me thinking about changing my last name, something they had not been too receptive to last time I tried to air the possibility, and so I had just dropped it. “But why, mamma? You are a Lichtenstein!” they seemed to exclaim in emphatic unison. Yes, I said, it’s true I’ve been a Lichtenstein since the day I married your pappa and decided to take his name for that reason, but now we are not married anymore, and there is a new Mrs. Lichtenstein. Silence. Until the oldest, about to be a freshman in college reasonably offered: “That’s a good point” and the other two mumbled their acquiescence.

As much as divorce can be about loss and things ending, it is also about new beginnings. So, rather than answering the question, “what’s my name?” I sip my coffee and ponder: “what will my name be?” Or even more deeply: “What can my story become?” Being and becoming. As French philosopher Gilles Deleuze posited (as he, in turn was elaborating on Nietzsche’s philosophy), human reality is more about a constant becoming, not a static being. Being in a process, then, seems to at once welcome the idea of “I am” (“I exist” – a concept I like to admit and enjoy for now) to include the more open ended notion of “I am becoming.” 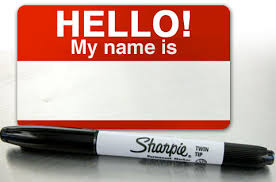 Leave a Reply to The Viking Jewess Cancel reply